Originating in 2009, the project Pomegranate Arils: Stronger Young Women, Happier Tomorrows has been realized by the Ministry of Family and Social Policies, and Boyner Holding and its subsidiaries, with the technical support from the United Nations Population Fund (UNFPA), the partnership of the General Directorate of Child Services and the Human Management Association of Turkey (PERYÖN), and the cooperation with the Family Health and Planning Foundation of Turkey (TAPV).

The project Pomegranate Arils – Stronger Women, Happier Tomorrows; aimed to promote the continued education of the 18-24 year-old young female high school and university graduates that grew up in orphanages of the ‘General Directorate of Child Services’ and exposed to social and economic discrimination in the society, and to teach them how to get prepared for the labour market by improving their personal developments and developing their job search skills. Pomegranate Arils was the first women-focused project implemented by the private sector in “orphanages”. In addition, the Pomegranate Arils selected as an exemplary project by the United Nations also received many national and international awards.

During the first 5 years (2009-2014), 160 young women that grew up in orphanages were provided with trainings in various fields extending from personal development to academic success support, and from preparation for higher education to consultancy for choice of professions and the young women were supported by a mentoring program.

In the second period between the years of 2014-2016, a study covering 370 care providers, social service specialists, psychologists and teachers working in the orphanages (love houses and child and care houses) of the General Directorate of Child Services was conducted. By providing instructive training for development of personal knowledge and competencies in childrearing and through an empowerment approach for raising of children under 18 years of age, the Pomegranate Arils Project was transformed into a sustainable program. In other words, by training of trainers, the process was transferred to the stakeholders in orphanages.

There are nearly 40.000 people in 69 cities including the project participants, stakeholders, training personnel, the staff of the General Directorate of Child Services who are involved in and within the sphere of influence of the project. Out of the young women that attended the activities within the scope of the project, 88% was employed; the number of those continuing their education during the project increased to 15% and today, 5% of the graduates are still continuing their education. 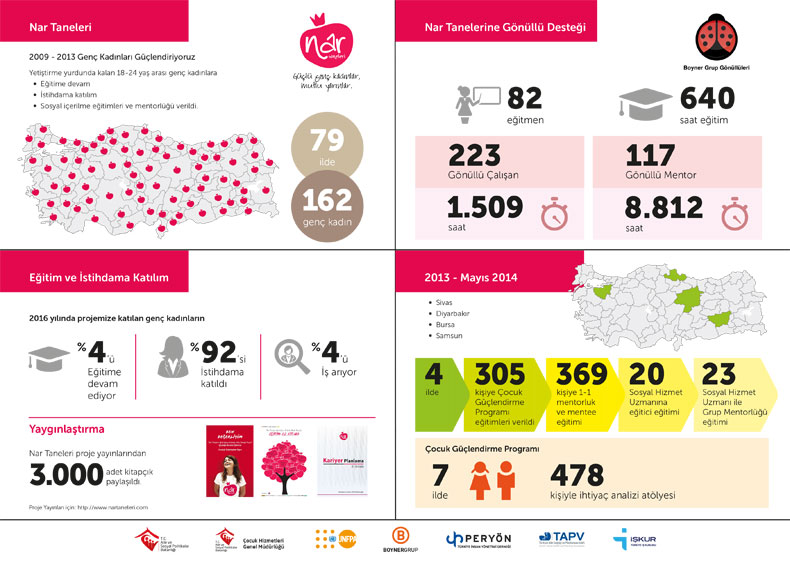